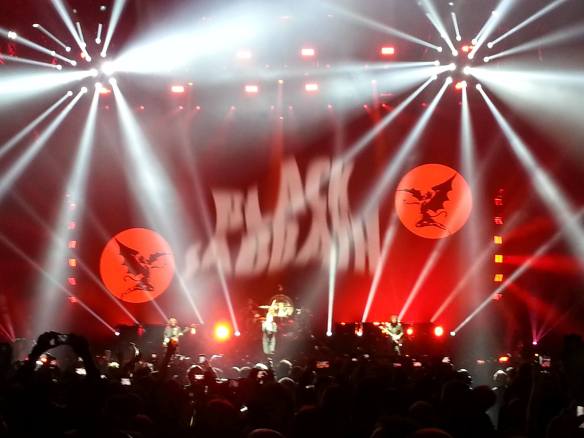 Black Sabbath is the great heavy rock & roll singularity. Before Sabbath, there was nothing but an infinitely dense, hot mass of possibility. From their very first sinister tritone, the borders of rock and roll expanded instantly and endlessly, and in that moment they created the universal conditions under which all hard rock that came afterwards would need to obey to exist. If Led Zeppelin are hard rock’s golden gods, then Black Sabbath are the avenging angels.

Through a happy coincidence, a friend of mine had floor tickets to their recent show in Hamilton. The appeal behind the idea of seeing this mighty band was too strong to resist. We made our plans to escape Toronto, to make our pilgrimage to see the masters.

First Canada Place (formerly known as Copps Coliseum) was writhing with excitement when we arrived. The concessions area was filled with people clad in black. Hard rockers of all ages skulked through the space, pregnant with anticipation. After loading up on drinks, we found our way to our seats, about two-thirds of the way from the stage, at the floor level. A great shimmering curtain concealed the stage in front of us, as blue lazers flashed “Black Sabbath” at a frequency that was too low to be captured by camera. This small touch convinced me that what we were about to see and hear had to be absorbed first-hand, not through a tiny digital sensor. The band wanted to play for our eyes and ears, not for our cameras.

We were sat in stupefied awe, glugging back cheap beer while we waited for the darkness to descend. And then suddenly the curtain dropped, the room went black, and those distinctive air-raid sirens filled the room. Then the solemn atmosphere was split open by the Ozzy laugh, ringing around the cavernous space like the Phantom of the Opera. The stage erupted in light and colour and there they were, in the flesh.  It’s difficult for me to describe the effect of actually seeing these men in person. I was dumbfounded. I stood, mouth agape, in total shock. I turned to my friend, who was also rapt, and babbled like an adolescent, “holy shit dude, that’s Black Sabbath! They’re right there! It’s actually them!”

It was like seeing a fable brought to life. It was like travelling though time. It was like holding hands with God.  They started to play “War Pigs” and I felt like I had been shot in the chest with pure adrenalin. It was magic. The power and the majesty, the sheer heaviness of it, ripped through me like a gravity wave. Time became elastic and stretched out in front of me. By time the outro was scorching the air all around us with sonic napalm, the crowd was SINGING ALONG TO THE GUITAR SOLO! It sounded like a barbarian army pounding down the gates of Hell. I’ve never heard an entire audience sing a guitar solo, note for note. I’ll never forget it. And that was just the first track.

The band wasted no time, quickly segueing into the bluesy sludge of “Into The Void”. Ozzy took some time to prowl the stage, running back and forth in his characteristic caveman style. “Clap your fucking hands!” he screamed, not for the only time that evening. When the shock had finally worn off, I worked my way into a comfortable groove of head bobbing alternated with fists in the air.

Even now, Geezer Butler remains an absolute monster of a bassist.  Watching him navigate the bottom of the next song, “Under The Sun/Every Day Comes and Goes”, made me realize how much of the modern concept of musical heaviness comes directly from Geezer: that over-driven, fuzzy bass sound comes straight from his fingers, and the way he attacks the strings. It’s all in the way he wrenches those booming notes into creation.

By now they were into the “Volume 4” section of the set, so the next tune was their ode to chemical dependency, “Snow Blind”. With their young touring drummer Tommy Clufetos, they were able to make this song a bit choppier, a bit funkier than the recorded version. Tony Iommi’s hands melted my brain forever. His soloing was like sculpture carved from ancient stone. I am not capable of explaining how transcendent his playing is. Effortless and stoic, like an aged wizard, he peeled off scorching licks one after the other, barely moving. It was effortless.

“Age of Reason,” from their latest album, was next. Although this new Rick Rubin-produced album is glossy and polished to within an inch of its life, it actually does a great job of capturing what makes Sabbath great. The band clearly enjoyed playing some new material among all the classics. 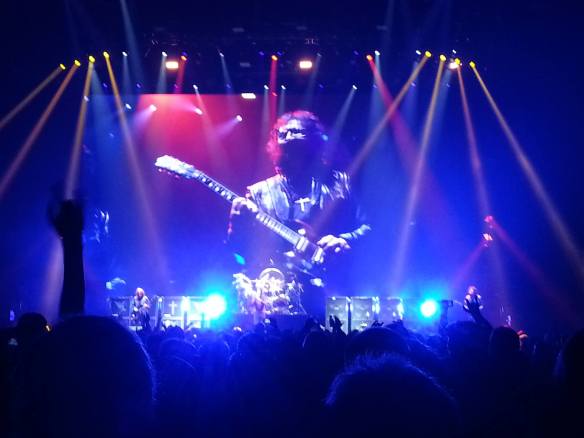 There are times in your life when you can see the big picture, when time and matter and existence and all the other constructs of human psychology drop away, and you dissolve into the pure essence of all things. For me, this happened during Tony Iommi’s solo on the band’s title song, “Black Sabbath”. Everything disappeared around me and I became that solo. I’ve never heard a better guitar solo in my entire life, and I’ve seen some great players. Tony is just so effortless, so refined, so deceptively simple, and yet there is this sense of danger and majesty. I felt every molecule in my body vibrating with each note.

“Behind the Wall of Sleep” felt like boulders falling from the ceiling. The stop-start groove of “NIB” brought the energy to a glorious flashpoint.  “End Of The Beginning”, one of the new songs, melted the elements and re-forged them as something older and wiser. There was a block of second album songs, including my favourite Sabbath tune, “Faeries Wear Boots”, along with the epic “Rat Salad”.  Then there was an extended drum solo, leaving their young drummer alone to show off while the rest of the band took a break, only to return to the familiar intro to “Iron Man”.  From there the show blurred together in my mind, aided by alcohol and nostalgia, and the next thing I knew we were stumbling out into the darkness while the last strains of “Paranoid” hung in the chilled night air.

I’m hard-pressed to remember a more transcendent show. It was a beautiful and awe-inspiring trip into the pure primordial power of electric rock. I left feeling exhilarated and refreshed. It’s odd how embracing the darkness leads you back to the light.