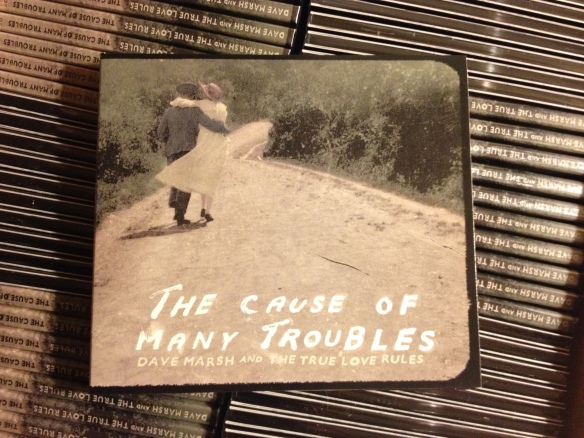 “The Cause of Many Troubles” by Dave Marsh & The True Love Rules is a diverse, exciting album about love in all its forms. Presented as a fragmented narrative of all of the phases of love and attachment, it is simultaneously sweet, sentimental, bitter, angry, subtle, lusty, romantic, funny, sarcastic and sincere. Front-man Dave Marsh has studied rock and roll extensively enough to understand that there is more than one way to split the standard rock elements, and as such the album can be understood as a sort of guided tour through all the music that he grew up with.

The cover art of this album is a family photograph of Dave Marsh’s grandmother. Sometime after WWI, this photo of the lady with her beau was taken. Years later, I’m told, she wrote “The Cause of Many Troubles” across the photo, presumably as a reminder of the journey that we all undertake in the name of devotion. One of the strengths of the long-form album is its ability to synthesize all the elements of this journey into a relatable narrative. On his new album, Marsh has shown us a glimpse of the romantic heart inside one of Canada’s premier musicians.

The record begins with a jaunty tune called “She’ll Never Here A Love Song” (which features a hilarious voice-mail cameo by Ian McGettigan). Over a barrel-house country/pop rocker, March pledges his allegiance to the idea of freedom and the joys of moving on.  “The New Laura Stein” is an apparent ode to the former bassist of the band Jale, and in a general sense, to cool girls everywhere. This song is a brassy, swaggering thing, with March intoning “the girl is fine, she must be the new Laura Stein” atop a honking squall of guitars and saxophones. Sonically, it’s a song that asks you to imagine what would happen if Bowie settled down in Dartmouth.

“You Are A Dream” drapes a shapeless longing across an upbeat acoustic rock frame. Marsh is plumbing the depths of his desire. “Me And My Baby” explores the physical and emotional distance that separates the ones we cherish from the rest of the world. A dark acoustic progression fuels the song, with descending arpeggios on twelve string guitars taking it into sixties folk territory. The tune ends abruptly, leaving us on the edge of town, pondering the nature of the isolation.

“Sexy Girl” takes a suave and sinister turn, wherein the narrator starts to realize that he’s gotten himself wrapped up with a scandalous woman. This one has a quasi-Motown vibe, with the tinkling glockenspiel and the general funk flavor. A brilliantly damaged guitar solo increases the lurking, haunted feeling of the song.  “I Manipulated” kicks up some dust, sneering like a leather-clad punk with a pocket full speed. Full of herky-jerky vocal tics and metallic, pounding percussion, this song brings us back to the higher energy of the earlier tracks.  “River of Love” is a paean to the power of adoration to sustain us on life’s journey. A top distorted guitars and spooky sounds that resemble theramins, Marsh declares “you and me, will always be, if we drown on the river of love.”

Toward the end of the album, the music starts to journey deeper into personal tragedy and anxiety. Marsh is exposing his pain in hopes of emotional sublimation. “Sister Come Home” is a gorgeous ballad about loss and redemption, like the aforementioned wayward female returning home to her lonely companion. “Sister come home, it’s been too long” he sings in a sad and resigned voice, weary with the years and the weight of memory. It’s beautiful and heartbreaking and perfect. Sparing guitars and piano dance around the song like recollections flitting through a mind’s eye.

“I felt so stupid, messing up with Cupid”, Marsh sings at the beginning at “Source Of My Sorrows”, acknowledging his part of the romantic debacle alluded to throughout the album. With this song, he’s copping to his part while still pointing out that “you are the source of my sorrow”. Musically this song is like a county and western song done by a sixties British invasion group, with crunchy guitars laying down the groove while a piano plays hopscotch melodies in the foreground.

Then the album takes a heavier detour with the title track, “The Cause Of Many Sorrows”. This brilliant track is a slow-burning ballad, complete with organs and lots of big guitars.  Here Marsh takes us into the heart of a disconnected, circular argument, the kind you have with those you love when you know that you’re fighting for your own freedom. Some layered backing vocals and the organ give this song beautiful underpinning for all the bitterness of the lyric, once again draping an uncomfortable truth in sonic beauty. The guitars squeal and bite at each other like feral cats.

“We Don’t Belong Here/Everything Has Changed” is a wonderfully schizophrenic two-part composition. The first part begins with Marsh longing for oblivion: “I want the ground to open up and swallow me down”. The music is deceptively happy, all major chords and drums that beg for foot-tapping. In this wonderfully incongruous setting, Marsh lays out his most personal admissions of failure and feelings of becoming unmoored, of being excluded. Then it all changes to a minor progression, with high moaning vocals adding a touch of melancholy. “Everything has changed, more than just a name”. The song splits itself with a sinister breakdown and a vicious, slow-building assault, before returning to the happier vibes with a savage guitar riff and a choir of voices adding effective counterpoint to the lead vocal.

“This Is How We Say Goodnight” is a dark, circular song, almost like a chant or some dark mantra. A relentless pounding drives the song under Marsh’s half-sung, half-spoken vocals. There’s a pleading, beseeching quality, as if he’s trying to coax his lover to return with a mix of come-ons and bitter asides. “This is how we say goodnight” he repeats, over and over, each utterance gaining in intensity until the song evaporates in front of your very eyes.

“The Lost Art Of Love” is a country/folk jam complete with accordion and Luther Perkins-style country licks. It returns us to the happy feel after the darkness of the album’s back half.  But true to form, Marsh works in some killer lines like “the lost art of love, like whistling in the wind.” The two-step builds until there’s a full-on party happening in the background, with lots of singers and the accordions dancing up a storm. It ends on a quirky note, with a huge vocal cadence.

With their latest record, Dave Marsh & The True Love Rules have taken us deeper into their confidence, and in the process they elucidate the triumphant highs and soul-crushing lows of be love via an encyclopedic tour of the history of rock & roll. It’s only through this process revelation that logic and order can be wrenched out of what is often a sad, lonely world. And these men are here to commiserate, to regale, and most importantly, to show us the way.