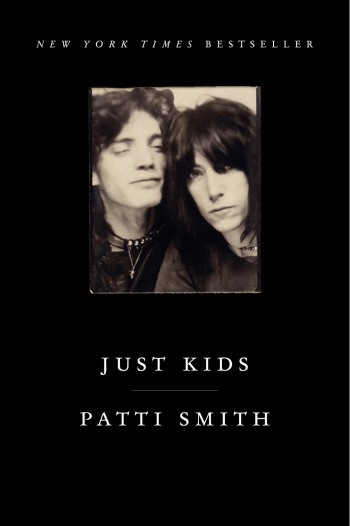 There are those brave souls who put so much of themselves into their creations that their lives become works of art in and of themselves. This book is the story of two such adventurers.

Patti Smith’s “Just Kids” is a stunning, engrossing, elegiac tribute to her artistic soul mate, Robert Mapplethorpe. It’s been said that this is the best book ever written about becoming an artist. I agree. In all of the artist biographies that I’ve read, none have the pathos and depth of emotion embodied by this story of love and loss and triumph and tragedy. It probably doesn’t come as a surprise to anyone that Smith is a supremely talented writer. Her voice in written form is just as distinctive as her voice as a singer-songwriter, and she is able to be just as visceral and evocative in print as she is in song. The story begins with two aspiring “kids” trying to make their way in the world as creative people, and follows an epic arc into betrayal, drugs, and confused sexuality, into artistic actualization and eventual redemption. The story is so beautifully symmetrical, almost as if it was written as fiction, but the force of Smith’s words belies the truth at the heart of the tale.

Robert Mapplethorpe was a gay man who just happened to fall in love with a very unique woman. His work as a photographer, painter, and sculptor was challenging, conflicted, and intense, reflecting the temperaments of the man himself. Patti was there as his sole confidant and support as he struggled to define himself and his artistic voice. The bond shared between these two people was not defined by sexuality or the conventional definitions of romantic love. Rather, their bond was based on an intense and intimate need for self-expression and mutual trust. They loved each other as deeply and truly as two humans can.

We watch as the relationship between the two of them morphs and changes as they each become the artists they were born to be. We stand in awe as Patti records her first singles, and we are inside the studio when Mapplethorpe first finds his calling as a photographer. Finally, we are invited in the most private moments of their lives, as Mapplethorpe is slowly ravaged by disease and Patti makes peace with their troubled past. In the beginning, it all started with a beautiful object created out of someone’s desire. This is also where the story ends, in some of the most heartbreaking words ever committed to the page.

The book also features evocative cameos from many of the old ghosts of New York among its varied cast. Burroughs and Hendrix make guest appearances, Janis Joplin stops by for drink, redneck genius Sam Sheppard takes Patti on a date to Max’s Kansas City, beat poets haunt the back pages, and the omnipresent spirit of Dylan hangs over it all like an autumn fog. The Chelsea Hotel is the scene of the main action, back in the glory days of the early 1970s. Tragic genius Arthur Rimbaud is presented as her obsession, her school-girl crush and her biggest inspiration, aside from Dylan. She conflates these two figures into one poetic archetype, like different sides of the same coin. New York itself is the other main character in the story. It watches the story like a gargoyle perched on a windswept ledge, and we feel its gritty texture on most every page.

Although she found her fame as a musician, Patti Smith always wanted to be a writer, even before music took hold of her. This is made clear by her reminiscences of her youth spent with musty books and the elaborate games of make-believe that she played with her siblings. She has said that Mapplethorpe once told her that she was the only one who could possibly write their story, and it’s difficult to imagine how anyone else could have approached this tale with the same amount of grace. These are the memories of searching, memories of a fearless heart. It is, quite simply, one of the most beautiful and amazing stories I have ever read.

This book is the story of two magnificent, extraordinary lives, and the love that held them together. It’s an amazing and life-affirming story, and it all started with a couple of kids.