Toronto’s Nuit Blanche functions on a combination of spectacle and a willing submission to the transformative power of art. Here is what I witnessed at this year’s event. I experienced two excellent pieces which both utilized the limitless power of sound.

As I approached Casa Loma with a small group of friends, I had no idea what to expect. My experiences at the Casa the previous year had been surprising and amazing, and I knew that any artist who even temporarily had command of this space would embrace the setting to do something sublime and wonderful. As before, I had intended to access the Casa Loma Stables, a smaller but equally interesting castle-like structure across the road. I walked through the parking area, past a set of portable toilets, into a great piece of art. Within Casa Loma’s stables, the first room contained a single tree, a fake tree, bathed in purple light. I looked at it curiously for a moment before moving to the main room towards the rear of the building. 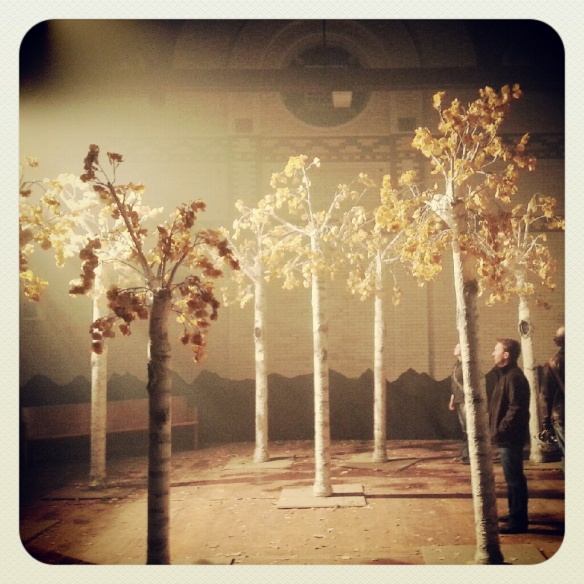 Essentially, the artist had filled the space with large constructed trees, approximating the look of birch trees. They were arranged in an artificial forest inside the rear room of the stable building. The arched ceilings increased the impact and exaggerated the height of the fake trees. The light was warm and the glow became golden as it passed through artificial leaves.

And inside each tree sculpture was a small speaker, all of which emitting different forest sounds and other more surreal urban sounds.

It was like a bizarre zen garden, enhanced by the conflict between the eyes and the sound swimming though the room, and staged perfectly in a room that was once used for horses, I assume. Church pews circled the piece, adding to the feeling that we were peering through space into some tranquil meadow. I moved through the forest absorbing and reflecting sound, vibrating with the frequencies that rushed passed my ears, feeling the warmth of a phantom sun. There were many people there, but they all seemed to be behaving in a hushed, reverential manner. It was calm and clear as a moment can be.

The theatre was a surreal, haunting place. The whole interior was frosted with gold and dipped in deep crimson. I climbed a short set of stairs into the first theatre box, taking advantage of the setting to observe from the best seat in the house.

A lone grand piano stood on the stage in a cold, eerie spotlight. Slowly, after an epic silence, a familiar and beautiful melody began playing with nobody at the keys. Then a gap: one of the key notes was missing. The next note was wrong, and the one after that sandwiched to closely to the next note. The non-existent pianist had lost his place in the music. He was making mistakes.

The description of this art piece reappeared in my mind. The music was Beethoven’s piano sonata number fourteen, known by nearly everyone as the “Moonlight Sonata” and surely one of the most recognizable and universal classical pieces of all-time. Apparently the artist encoded this music as Morse code, and transmitted it to the surface of the moon using a satellite, fracturing and rearranging the music in the process. The transmission was captured again after it bounced off of the moon, and this reflection was again encoded so that it could be recreated by a player piano. The “Moonlight Sonata” has now been to the moon itself. Inspiration collides with inspiration. I sat quietly and listened to this cycle of broken resolutions and fragmented melodies. I couldn’t stop “correcting” the melody in my head until I forced myself to feel the physical weight of the space around me, imagining the notes disappearing outwards into this enormous cushion of air that filled the theatre. Then the music became not just the work of Beethoven alone. It was a collaboration, a conversation between Ludwig and the architects of the universe. Chaos and Matter. Order and Air. I drifted backward past my old self and into a night that felt like it shouldn’t have been there. The darkness wrapped me and the notes followed me through cracks in the theatre walls.