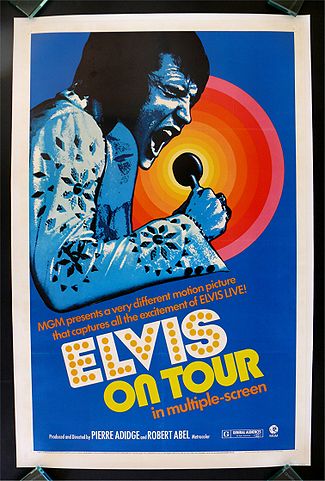 “I never saw a guitar player that was worth a damn.”

I was watching Turner Classic Movies last night, and they were running 24 hours of Elvis movies. I happened to tune in just in time to catch “Elvis On Tour”, a slightly bizarre theatrical documentary from 1972. The film is one big montage of concert sequences from his American tour that same year, rehearsals, and backstage moments. Interspersed throughout the film are voice-overs from Elvis, describing his rise to fame and his relationship with his band and fans. I have to say, even at this later stage in his career, that the man is magnetic.

Regal is the word: there’s a reason they called him The King. In the opening moments, he talks about how he still gets stage fright, every time. He warms up his voice with his buddies by singing old songs, songs of his youth. He paces like a tiger in a cage, checking and re-checking his costume, tucking his scarf into his jacket repeatedly, until it’s just the way he wants it. Someone tells him that the stage is small; he’ll have to be careful up there because there isn’t as much room as he’s used to. He patiently waits offstage for his royal fanfare, and then storms the spotlight light to be bathed in screams and flashbulbs.

His presence is physically tangible, even on film. Onstage, he is a beast of charismatic energy; you can’t stop watching him. Eyes closed, head tilted back, his face contorted with pain and ecstasy, he commands his enormous band with the twitching of his fingers. His voice is as good as ever, dripping with sheer musical joy. The thing about Elvis is, the guy could work a room. Woman fall at this feet crying, like they are prostrating themselves on the tomb of a martyred saint. He picks a pair of underwear up off of the floor. Grinning and laughing, he waves them at a girl in the audience. “Are these yours darlin’?”, he intones in that iconic voice, and the screams erupt again like fireworks. Song after song climaxes in a flood of expertly flashy musicianship and karate chops. He plows through one song after another, until the whole thing reaches a fever pitch, and he’s gone; back to his limousines and his private hotel suites.

The rehearsal scenes are the best: he is visibly moved while listening to his backup vocalists sing a gospel tune. He has a real communion with his singers; although he is The King, they are the most trusted members of his court. He must be intimate with them to get that close to the notes. They have to learn the nooks and crannies of each other’s voices. He smiles like the boy he once was after nailing a particularly tricky harmony. His courtiers are awed. The King still reigns.

After the movies and the explosion of his early days, there is nothing left for Elvis but the music. This film shows a man who is older, yes, but not broken, and not the washed up shell that our myopic history has made him out to be. Yes, he is wrapped in flashy clothes and insulated by his wealth and fame, but that is actually fitting of a monarch. This is a man consumed by music, who has nothing left but his voice and his muse. He has nothing left to connect him to humanity accept his charisma and his astonishing ability to belt out songs.

His bravery as a performer was truly inspiring. He knew that he could do no wrong. Here he is during one of his sets, reading the words for “Burning Love” off of a piece of paper. The man was fearless.