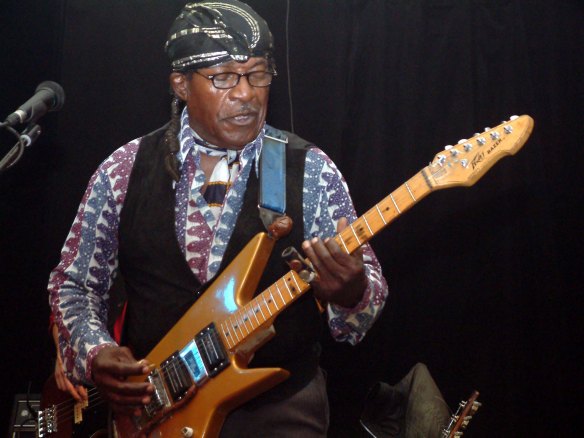 Eddie Kirkland was a blues singer and guitarist who was born on August 16th, 1923, in Jamaica. His young mother relocated him to Alabama, where he was raised until he ran away and joined a medicine show when he was twelve. He eventually found his way to Detroit, where he became the backing guitarist, and eventual tour manager, for John Lee Hooker. The two played together for 13 years, starting in 1949. In the early sixties, after he parted ways with Hooker, he went back to the South and became Otis Redding’s bandleader in Macon, Georgia. In the mid-sixties his career hit a commercial low-point, and he took a job as a mechanic. In the 1970s he was “rediscovered” by musicologist and blues historian Peter B. Lowry, eventually leading to a resurgence in his musical career; he even became friends with Foghat (one of the best-selling bands of the 70s) during this period.

He continued touring more or less constantly until his death at age 88, in an automobile accident last year; this restless pace of work evidently earned him his nickname “Gypsy of the Blues”. In later years he toured with a white blues band called the Wentus Blues Band from Finland.

Here’s Eddie and the Wentus Blues Band performing at an Italian blues festival: