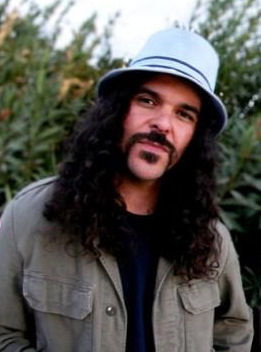 Today is Brant Bjork’s 39th birthday. Bjork is a multi-talented multi-instrumentalist with a long resume of projects, both as a band member and a quasi-solo artist. But he is known to most rock fans primarily as the founding drummer of Kyuss, the most influential band ever to come out of Palm Desert California. Kyuss had a long and mythical back-story on the road to fame, which began with the so-called “generator parties” in the late eighties and early nineties. Bands in Palm Desert would simply rent a gas-powered generator, drive out to an isolated area of the desert, and play for anyone who would show up. These were not “gigs” as such, but free-for-all parties where people could come to drink, do drugs, and generally carry on in a way that none of the local venues would allow at the time. A sociological study could be done about these events, as they gave rise to not only Kyuss, but a whole slew of amazing rock bands that probably wouldn’t have made much of an impact otherwise. Because of the later fame of bands like Kyuss and their spiritual forefathers Yawning Man, the generator parties have taken on a mystical significance for fans of this particular rock sub-genre. Josh Homme himself often implies that a lot of the mystique around these events has been blown out of proportion in revisionist rock and roll history; nonetheless, he does acknowledge that it was a special and formative time for his music.

For a long time, the only information we had about these party’s was this kind of word-of-mouth rhapsodising; it was a “you had to be there” type of vague description. But through the miracle of YouTube, we can now get a look and feel of what these crazy-ass binges were actually like. I found this video online, and I post it here as a tribute to Brant Bjork and this day of his birth. It’s origins are mysterious, but it shows the rest of us what we missed.

Here is Kyuss, in all their youthful glory, rocking the hell out of “Whitewater”, the final track from their “Welcome To Sky Valley” album, in the desert at one of the generator parties. Two things strike me about this video. Firstly, it really does look like absolute chaos; there is no separation between the band and the audience, just one big heaving mass of people. The second striking thing is how immaculately tight they are as musicians. There are no monitors enabling them the hear each other well, and even the light source seems inadequate, and yet somehow they play the song almost identically to the studio version while barely even noticing the bacchanal going on around them. Someone must have cut a deal with Satan to get this footage, because it certainly looks like an awesome party in Hell.