There was a time, not so long ago, when bands would put out one record every calendar year, regardless of the commercial success of the previous album. Now, when a band has established itself in the mainstream and makes a hit album, they usually tour the hell out of it for a couple years before they even think about recording the next album. So when The Black Keys announced that they were following-up their massive “Brothers” album with a new record released the same year as their Grammy wins for that album, I was impressed that an established band would make such a gutsy move. But then I remembered that in the classic rock era, bands would seek to capitalize on success not by repetition, but by giving their audiences new product as soon as possible. Its makes sense, but very few artists nowadays are willing to take the chance that they won’t be able to replicate their brilliance and the associated paycheck.

The Keys’ new album seems like a defiant and somewhat aggressive response to this modern commercial trend. Not only have they come back quickly, but they’ve done it with a record that sounds very little like its predecessor. “El Camino” is a raging, rattling, distortion-soaked beast of a record. There is no concession to the spacey soul music they plied on “Brothers”. Gone are the straight ballads; in their place are savage, stomping, dancey grooves and deep-fried guitars. This album’s closest relatives are “Thickfreakness”, with its volcanic guitar sound, and the subtle retro atmospherics of “Attack and Release”, their last Danger Mouse-produced record. Its like they listened back to “Attack and Release” and thought: “Let’s just do the “Attack” part this time- we’ll take out the slow songs and rub everything with sandpaper.” The main reason I cite this comparison is the dominance of vintage keyboard sounds, layers of Spectoresque backing vocals, and reverb, all of which are stylistic production hallmarks of Danger Mouse. These are the characteristics that “Attack and Release” employed in more ambient ways. The main difference is that where “Attack and Release” floated and drifted, song-wise, this album charges along with urgency and the raw power of good ol’ fuzzy rock and roll. Its interesting that they went back to the producer of one of their most under-rated albums, now that their audience is so much bigger. I’ve always liked “Attack and Release” and thought it under-appreciated as an album, so I’m glad they’ve given the collaboration another shot. Also, I wouldn’t be surprised if this album helps boost sales of vintage electric organs.

“El Camino” marks the final emergence of Dan Auerbach, Guitar Superhero. The power and confidence of his playing on this album is absolutely insane. He’s refined his style enough now that its become like a fingerprint- every note struck sounds with the essence of Dan. This is a rare and beautiful Zen-state thing that happens to guitarists when they are totally in connection with their abilities, and it makes “El Camino” their most confident recording to date.

What makes Patrick Carney a remarkable drummer is that he always sounds different than everyone else out there, partly due to his lack of formal training. This album is no different- he’s still the same unique, wonderful maniac. He pounds and flails the way he always has, although he does sound a bit more like a guy who has been playing the drums in big venues for a living. But he still sounds different and self-taught. A “studied” drummer would have taken a more traditional (or boring) route, and the songs would probably suffer aesthetically as a result. The only real difference on this album is the speed and intensity at which Carney plays- fast and loud.

The classic rock reference points are everywhere: parts of this album sound like Zeppelin, other tracks sound like Sabbath or The Cramps or T-Rex or Deep Purple or The 13th Floor Elevators. There’s even one song, “Little Black Submarines”, that bears a strong similarity to Tom Petty’s “Last Dance With Mary Jane”, a subversive Top 40 tune if there ever was one. “El Camino” is pretty subversive on the whole: I can’t recall another mainstream band, apart from The White Stripes, releasing such a raw-sounding album packed with such singable, catchy songs. Its a wonderfully perverse artistic challenge to the audience. The production style of “El Camino” is big and rough. It’s easily one of the most organic recordings by a mainstream band that I’ve heard recently. The live foundation of drums and guitar is augmented with keys and other sonic fairy dust, but it retains the gut-punch effect of live rock and roll. The overall sound of the album has the glossy sheen that says “major label mastering”, but otherwise this is music that could have been recorded by an indie band straight to a tape machine (an approach now referred to as “lo-fi” by the music production industry, which as a whole is currently drunk on digital power).

As for the songs, my first-glance favourite right now is “Gold On The Ceiling”. Its sort of a remake of the T-Rex homage “Howlin’ For You” from their last album. It has the same stomping glam-rock beat, the Bolan-style falsetto backing vocals, and this time the guitars sound even more overtly 1970s. Even this song seems like a response to the commercial success of “Howlin…”, a song which has become a go-to track for sports arenas and action movies. Its like the band is daring you not to be drawn in by the similarity to one of their biggest hits, and they’re going to give you what you want, but this time they’re going straight for the aesthetic/commercial jugular by making it even more irresistible. This song seems almost designed to be Big Hit #2 on this album. But that’s all afterthought- analytical nonsense. The reason I like this tune is simple: the wicked riff, the crazily thick guitars, and the chorus melody. Other first-look favs of mine include:

“Lonely Boy”: this song was well-chosen as first single, as it nicely announces the album’s fuzz-and-Farfisa garage-rock vibe, with a funky keyboard part, wickedly distorted guitars, and balls-out drumming.

“Run Right Back”: this song has an awesome slide guitar riff, and another stomping dancey beat. And I like ambiguity of the lyric: “She’s the worst thing I’ve been addicted to.”

“Sister”: sounds very much like a Motown track, but with more aggressive guitar and garage-rock bass playing. This song has a chord change in the chorus that was also used on “Attack and Release”, and it was while listening to it the first time that I hit on that comparison. If the riff and the melody in the chorus don’t grab you and make you want to move, then you’re not really listening. There’s also a little bit at the end where you can hear Carney putting his sticks down- one of the cool little sonic details scattered throughout the album.

Its amazing to me that “El Camino” is such a defiant reversal of what mainstream bands are supposed to do- mainly, become increasingly slick and musically boring as a they get more popular. I think this album could have a big impact on contemporary music trends. Or to put it another way: unless Josh Homme releases something, this could be the most important rock album by a major artist this year. 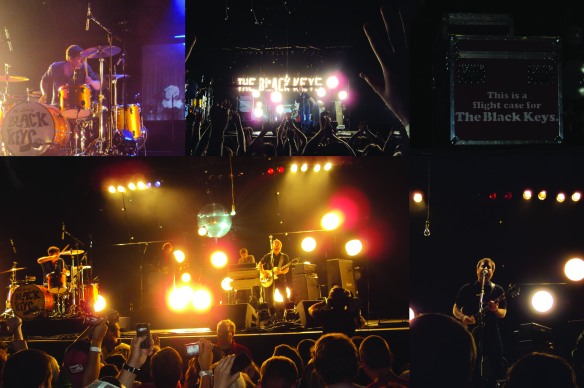