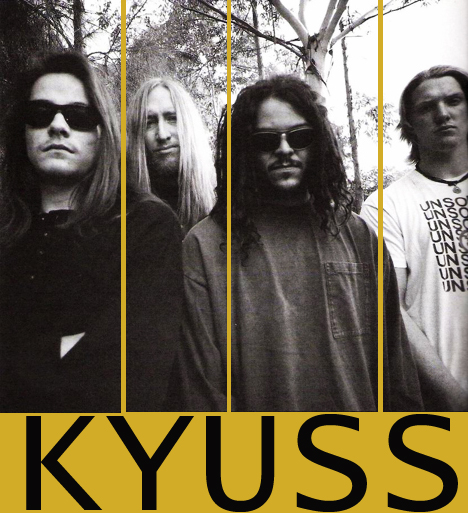 This is Kyuss. They don't care if you think they're cool...

When I was a teenager, there was a weird period when the truly great guitar bands of the 90s gave way to the testosterone-drunk imitators. This moment, of course, was when ‘rap-metal’ and ‘nu-metal’ (dumbest genre names ever, by the way) replaced grunge and alternative as the commercially dominant forms of guitar-based music. The whole mainstream rock scene became very macho and infected with the least subtle aspects of the grunge idiom (i.e. angst for its own sake, etc).

I see now what a blessing it is that I was raised as a classic rock fan, but as a teenager I was doing what you’re supposed to do: find your own thing.  I couldn’t really relate to any of the ‘nu-metal’ bands, so I went searching for newer music that related back to the classic rock that I loved. This idea of being inspired by the great rock bands of the past was something that the earliest alternative bands were very open about, but the nu-metal bands missed that part and seemed somehow ignorant of all that had come before them.  In the process of this research mission I discovered the then-burgeoning Stoner Rock/Desert Rock/Cosmic Doom movement (it went by many names), and at that point the undisputed leaders were a relatively new band called Queens Of The Stone Age. However, the Queens’ eminent position within the Stoner Rock scene was inherited from the first band of their leader Joshua Homme. I speak, of course, about the mighty Kyuss.

My perception of so-called ‘heavy’ contemporary music at the time was that it was dumb, humourless, not fun, and completely unsexy. The new metalheads that I was growing up around were listening to bands that were, from my perspective, either juiced-up glam rock bands, or simply boneheads who lacked taste and subtlety. They were loud, angry, stupid, and had no groove. There was nothing more to it than that, and I saw them as a direct descendant of all those insubstantial rock bands of the 1980s. And then I bought my first Kyuss album, which gave me hope that hard rock could be more artistic, and changed everything about my perception of heavy music in the process.

I purchased ‘Welcome To Sky Valley’, widely considered to be the band’s masterpiece, on a trip away from home, as the local record stores would never have stocked this kind of thing in my town. I purchased 3 of Kyuss’ 4 official albums at the same time. By this point, I had learned enough about the Desert Rock scene to know that these were considered seminal and important albums. I knew from the second I laid eyes on the cover art that ‘Sky Valley’ was the first one I wanted to listen to.

My friend Matt and I gathered in ceremonial fashion in my mother’s basement, which was where I kept my stereo since the thick concrete walls and general isolation of the space made it the ideal listening environment. We had been reading about Kyuss and slowly beginning to get more adventurous in our own music making, but neither of us had actually heard the band yet. This was pre-Napster, kids; you had to actually seek out the music you wanted to hear, and it required patience for people in a small town in Northern Ontario.

Our ritual was always the same when listening to a new album for the first time: we’d sit down directly in front of the speakers, wordless, remove the album artwork from the case, and press play on the first track. We would listen to the album from start to finish, examining the booklet and passing it back and forth between listeners so that everyone could experience the total package together. Conversation was rare and usually frowned-upon; indeed, I was known for throwing people out for interrupting my digestion of a new album. With Kyuss it was the same ceremony, although impregnated with a greater sense of expectation from all of the things we had read about the band.

With the first note on the very first song of ‘Welcome To Sky Valley’, my musical world was reshaped. I cannot overstate the impact of hearing ‘Gardenia’ for the first time; it was like a bomb went off in my imagination. The guitars were the heaviest, fuzziest, most crushing thing I had ever heard, and the drums were SWINGING- actually swinging in a wicked groove that basically dared you not to nod your head. I couldn’t believe what I heard. Here was an insanely heavy, loud, rock band, drenched in distortion, but their music was organic, sexy, mysterious, and dark.  It was the exact opposite of all the mainstream heavy bands at the time. Like the rock and roll junkie that I am, I was instantly hooked.

Of course, Kyuss had already been broken up for years at that point, and Queens had not yet recorded their breakthrough second album. But I knew from hearing ‘Sky Valley’ that this was something that I needed to follow and understand, because it took away all of my perceptions of modern heavy music as being dumb and ham-fisted. The songs stretched out in a way that I understood to be based on the improvisations of classic rock, but the tones and the ferocity with which the music was played came directly from the darkest corners of the punk rock universe. There was also, of course, the overwhelming 70s hard rock influence, from Sabbath to Motorhead, which shaded everything in bright, bold musical colours that I well understood. So their music was instantly familiar to me, but at the same time it was fresh and exciting. Kyuss was the black hole that absorbed all of my other musical tastes. I was inevitably drawn to this music as the new standard for awesome rock heaviness.

The world needs more Kyuss. Their albums still sound heavy and daring today, over 15 years after they ceased to exist as a band. Every time I listen to ‘Welcome To Sky Valley’ I am instantly transported back to that beautifully pure experience of hearing it for the first time.

Inside the booklet for ‘Sky Valley’, there is a line printed at the beginning of the credits that, to this day, is the greatest thing I’ve ever read in an album.

It reads as follows: 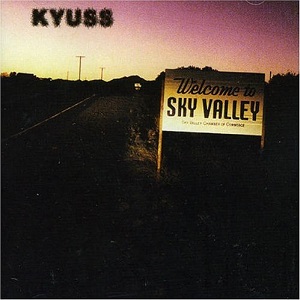