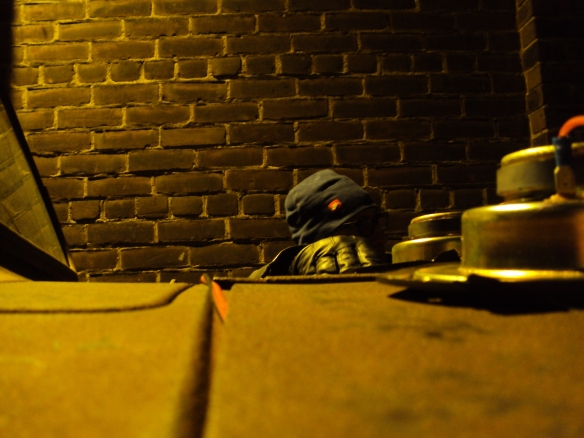 Every year I look forward to Nuit Blanche in Toronto. Being a musician, I always pay particular attention to any pieces that are based on sound or music, or the interaction of either of those elements with lights and video effects. Basically, I am a multi-media sound installation geek (hey, those guys need hangers-on, too). Last year proved to be a boon for me in that sense, as there was a huge installation at Nathan Phillips Square by Lanois, as well as a Lee Ranaldo piece. This year, the event had fewer works by artistic superstars such as these gentlemen, but there were still many exhibits featuring sound and music.

One that I managed to catch was titled Silent Music, and the artist statement enticingly promised large-scale light projections, “inspired by…the chaos in the creation of the Universe”. Also the National Ballet of Canada and the U of T Philharmonic would be performing along with the projections. The venue for this extravaganza was the Casa Loma Stables. Intrigued, I resolved to see this piece early in the night.

Once we located the installation (something which can be challenging at Nuit Blanche), we were confronted with a mass of swirling, mutating lights hugging the surface of the castle-like architecture of the stable buildings. Directly in front of the gate, a group of five musicians cranked out liquid space jazz grooves. There was a French horn, clarinet, an electric piano, and a Cajon. The Cajon was a very cool and efficient instrument choice, as it gave the percussionist the option of many different sounds over the course of one improvisation. The lights bathed the huge courtyard in green and blue geometric patterns, alternately obscuring and highlighting a small group of dancers beneath a large tree. They’d do one performance for ten or fifteen minutes, and then the whole thing would start over again. Each musical improvisation was coupled with a dance performance, and the lights were randomized so that no two performances were identical.

And impressive lights they were. It wasn’t just random projections; each one was moulded to the form of the building, colouring certain architectural features in bright neon hues, and then morphing into another pattern. The overall effect was surreal and calming. Each piece of the installation gave your senses a different stimulus, so that you were lulled into silence. My friends and I stood watching the performances from the gate for some time. 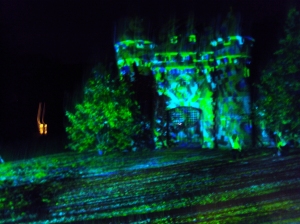 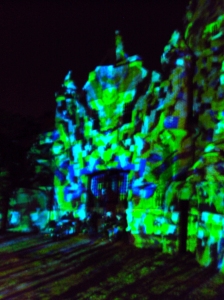 As we were leaving, we struck up a conversation with Ivo Vedenov, one of the two artists who created the installation. He was dressed in a heavy poncho and raving about the soup being served nearby. He was obviously very excited that we had enjoyed his piece, and proudly explained that each projection was uniquely created in real-time, using mathematical data related to astrophysics. The light patterns were actually created by readings of background radiation in deep space- the original energy behind the Big Bang that created the Universe. Because they were being created by a computer as the performance happened, he was using that energy in the act of instant creation here on earth. This was deep philosophical stuff. AND- the entire thing was done using store-bought, commercial projectors like the ones found in any office or electronics store! It was a four storey building! Mr. Vedenov expressed his joy at having pulled off the installation with seven ‘home’ projectors, since he normally uses larger units designed for lighting and theatre companies. 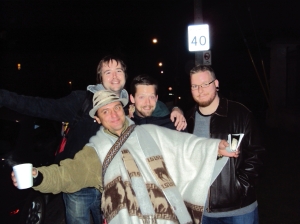 One other project that I want to mention did not, as far as I know, appear in any official programs guides for Nuit Blanche, and thus I can’t give the artist the credit he so richly deserves. He had a sign that said ‘22’, but I can’t find the name of the project anywhere. If anyone knows who this person is, or what the piece was called, please let me know!

In the Distillery, we came across a gentleman outside Cannery Building 58 who had rigged up the rusted corpse of a 1950’s Dodge truck with at least twelve small speakers. They were placed all over the body of the vehicle, with the speaker cones facing inward so that they made contact with the metal, and rigged up to a small amplifier and a laptop. The speakers would emit different sine wave tones that would swell in volume and then disappear, seemingly at random. By physically pressing on the metal panels of the truck his hands, the artist could manipulate the timbre and pitch of these tones, almost like rocking a wah pedal or playing the saw. The entire chassis of the truck also acted as a resonator, adding reverb and decay to the sound depending on where it was coming from. It was amazing to watch; in essence, they guy was ‘playing’ the truck. My friend Nick and I both seized the opportunity and jammed with the artist for a few minutes, pushing on the metal panels and warping the notes. At one point we had a full major triad going on the hood! So, now I know you can produce actual harmonic notes with a rusted old truck and brute strength. 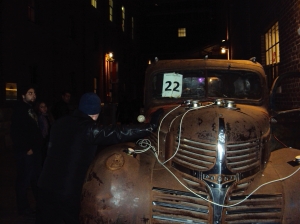 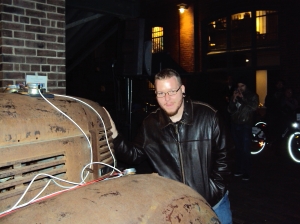 Nick Gaiser bends some steel in the Distillery...